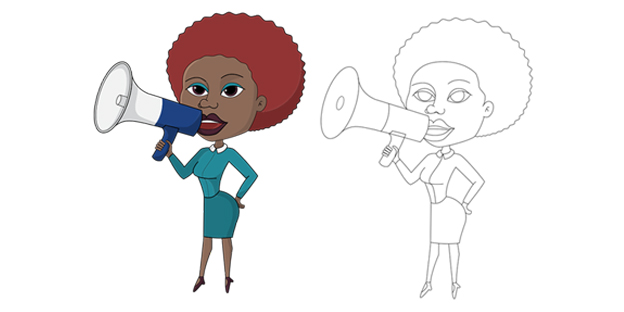 “Which came first:  the chicken or the egg?”
“Do we have free will or is everything predestined?”
“Should toilet paper hang to the front or the back of the roll?”

Some questions just don’t have a definite answer.  Others do.  There was one question that I thought I knew the answer to.  It turned out that I had to add it to the list of debatable ones above.  The question was:

To me, the answer was so clear.  As a visual learner who finds it far easier to process data if it is tied to images, it’s hard for me to imagine not preferring PowerPoint!  The way an image reminds me what I want to say next…the way it can build a little movie in attendees’ minds…the way I can get a laugh from a picture (when I might not have had anything funny to say)…it seemed so clear!  Why, of course the answer  was, “To PowerPoint!”  Sure, lots of speakers use it poorly on a regular basis, so people think they hate PowerPoint, but I was convinced that the only right answer was to learn to use it well.

But then came the day, about ten years ago, when this Little Grasshopper had to learn.

It’s 2008.  The phone rings and I am asked speak to a professional group.   The meeting will be long enough to support two full keynotes.  They tell me that the other speaker will be “Gloria,” whom  I happen to have met numerous times.  Our areas of expertise are rather different, but both are applicable to this group.

I’m excited to share the program time with her.  Gloria is great.  Did I mention she’s great?  Well, she’s great.  She’s lively, successful, and is dynamic in conversation, so I have little doubt she’ll also be good in keynoter mode and have terrific material to share.

The meeting planner asks me if I have a preference between going first or second.  I’m not sure.   Do I want to warm up the audience for Gloria…or vice versa?  I call Gloria to see if she has a strong preference.  She is on the fence as well.  Then a clever idea comes to me:

“Gloria, what if we do something that I’ve never seen two keynoters do together before?  My keynote, ‘Public Speaking: Get A’s, Not Zzzzzz’s!’  has ten key points about speaking in it.  What if I go first and then, around point number two, I transition to something about your topic…and then, to everyone’s surprise, you get up and speak for just a little while!  Then, after about ten minutes, knowing what my point number three is, you find a way to transition back over to me. “

“I love it!  Instead of one speaker doing a standard hour and then the other, we could pass the speaking ball back and forth about four times until we finish together in two hours.”

It takes us some work to figure out all the transitions, but we have fun with it and get really excited about the way it should work.  Equally fun is keeping the secret, knowing that, when I start, no one but us will know that the trade-off is coming.

With everything worked out, I work on my program, including updates to the order of my slides and their images.  About two days before the event, I suddenly have a panicking thought and grab the phone.

“Gloria, we have a problem!  Our plan to go back and forth between us − that’s not going to work.”

“Because all of those smooth transitions we planned are going to be ruined as we have to stop to switch back and forth between your PowerPoint deck and mine!”

“We don’t have a problem,” she says with a chuckle to her voice.

“No.  Milo, come on…you speak on ‘presentation skills’…and you’re going to do it with PowerPoint???”

“Well, of course!  There’s so many advantages to it.  I can’t imagine doing a whole hour without all the benefits of PowerPoint!  Wait… you don’t use it?”

“No, never!  I get ideas while I’m on stage and being tied to PowerPoint would cripple me.  I couldn’t possibly limit myself like that.”

I’m relieved to realize that we will only have to cover the projector lens during her portions and uncover it to continue with my program, so our plan will work.  But as a speaking coach, I am silently horrified that she would keep things so loosey-goosey  and only lecture about her business topic for a full hour!  I am also suddenly relieved for my audience that they will have me, too − with the fun images of my program to break up all her talkiness.

The big day comes.  I eagerly take the stage, with my slides changing every 30 seconds or so as I speak.  As I had hoped, people seem invigorated.  They’re laughing and they’re taking notes.  All great!  Then, as planned, after my point number two, I interject, “But how would you apply what I’m saying to your marketing?   Before I move on to point #3, let’s hear a little about that…from your other speaker, Gloria!”

Everyone is surprised, including the event planner, as Gloria bounds to the stage to big applause.  But secretly, I am worried for her.  My first quarter of speaking had gone so well.  And my way of playing off my PowerPoint seemed a key factor in that.  I really hope it wouldn’t make her portions seem drab when she does nothing but…well…talk.

The applause fades as Gloria put a coffee mug in front of the projector light to darken the screen.  She looks up and flashes her dynamite smile.  And then she takes off!  Stories, ideas, challenges….my mind is painting all the images that I need because she is so good.   And the audience appears just as enthralled, without anything to look at but her.

About ten minutes later, somewhat out of left field to me, she suddenly spouts, “But what about if you’re delivering a marketing speech and say something that offends someone in the room?  How could you bounce back from that?  Better not to let that happen, right?  Well, back on his point #3 about that, welcome back, Milo!”

Just as she reaches to move that coffee mug, I press my PowerPoint remote and the audience expresses delight in seeing on the screen:  “Keypoint #3:  Avoiding Offending Your Audience.”  And off I go on that topic.

After two hours of this, our successful ping-pong match ends − to big applause as we bow together.  Once we each finish selling a few books, we have a few minutes alone to debrief.

“Gloria, I have a confession to make.  I came into this as a bit of a PowerPoint snob.  I wondered if you were really going to hold them on your business topic without PowerPoint for visuals.  But you absolutely did.  Especially during that story about the cocker spaniel and the fountain.”

She smiles.  “I hadn’t planned on telling that one, actually.  But something you said made me think of it and I thought it would work well.”

“And I now that you couldn’t have done that if you’d already had images for another story loaded into a PowerPoint all geared up.  I wouldn’t say this to many others, but for you, honestly, you probably should never use PowerPoint.”

“I like to react.  I allow myself to be inspired.  I like to see if new examples hit me in the moment.  So, yes, PowerPoint isn’t for me.  But, since it’s confession time…when you told me you were going to use PowerPoint to teach about public speaking skills, I thought, ‘Ugh, that’s going to be such a drag.  Poor Milo!  I’m going to make him look so dry by comparison!’  But then I saw you in action and the way you punctuate so much with images, the way you react to the slides and let that inspire you…I loved it!  I’ve never seen anyone so playful with his PowerPoint slides before.  So I probably won’t say THIS often, but Milo, you should probably never be without PowerPoint.”

I had been amazed watching Gloria captivate the audience solely through her adaptive stories and was so proud to see that my visuals with PowerPoint really did make attendees more receptive to my points.  Neither right or wrong…just different.  But I do still think you have to be as good as her to make better option be to not use the tool.

So now in my coaching, while I still extol the virtues of PowerPoint, I’ve changed what I say about it.  What I tell most people now is this:

“There are three ways to use PowerPoint:  1)  Effectively  2) Poorly, or 3) Not at all.  Sadly, most speakers choose option 2.  Let me show you how to use it really well and then, if it’s just not you, we can make a choice whether to use it or not.”

Most people do come around to my way of thinking and love what they discover they can do with PowerPoint to bring out their points with images and allow images to lead their speaking.  And as for me, if I have time to make a good slide deck, I’ll use PowerPoint every chance I get.  But when I’m getting the vibe that I’ve got a Gloria on my hands (and that not using PowerPoint is part of what allows her to be as good as she is), at least I know they’re not wrong; they’re just exceptional.