Public Speaking: Don’t Kill Those “Butterflies” in the Stomach! 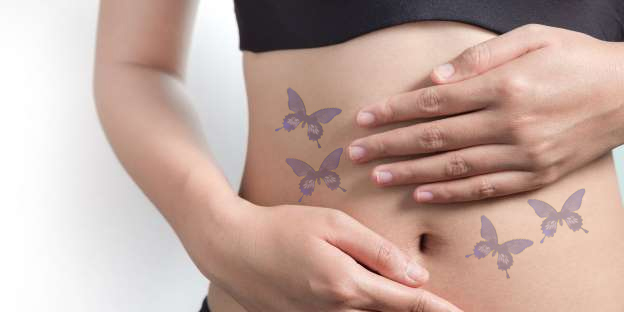 When I answer my phone as a public speaking coach and it’s a new potential client, often times within about 30 seconds, the word “fear” comes up, as well as its cousins: “nerves” and “anxiety.” As I’ve talked about in previous articles, for most people this is not a phobia; this is a natural reaction for being asked to do something you aren’t trained to do. The underlying message we buy into is, “If you know English, you should be able to get up and speak.” That’s about as logical as saying, “If you have arms and legs, you should be able to hold up your end of a tennis match.”

Among those with fear, many also say, “When I get up there, the butterflies in my stomach keep me from doing a good job.” Truly, we don’t want our physical reaction to speaking to distract us from being successful. After all, no one benefits from worrying they might lose their lunch during a presentation. But do we really want to be 100% in our comfort zone so that there are no butterflies in our tummies at all? You might be surprised to learn that I actually don’t want that for you…or myself.

If I had to choose, I’d rather see a flawed-but-energetic speaker than a calm-looking one who is flat-line. Energy is a key component to good presenting. And just like a flashlight can’t draw from D-cells that were last used on that ’06 camping trip, we speakers can’t draw from a body that isn’t charged up. Having that bit of charge could have some ramifications, but a wee bit of butterfly tummy flight isn’t a bad thing.

I’ve been speaking at conferences since 2004 and I don’t think there’s ever been a time that I’ve stood in the wings, hearing my intro being read, that I didn’t feel those fellas rustling some. And that’s more than fine, it’s necessary.

I tell my clients to notice it, recognize it, and thank your body for telling you. It’s giving you a source of energy to channel, to show liveliness out there. Let the butterflies take flight. Use them like fuel. You will get more comfortable as the speech time passes, so you’ll want every butterfly to carry you through to the end.

One More Time: A Memoir is the life and career story of Carol Burnett, arguably the greatest comedienne of the 1960s and 1970s. It includes a story from a period in her life when she was a huge draw at a nightclub, doing two shows per night, seven nights per week. One night, as she prepared to go on stage for the early show, she got overconfident and let the butterflies die:

“I was cool as a cucumber and, as I was putting on my lipstick and fixing my hair in the dressing room, I thought back to all those silly times I had been nervous about performing, how my heart would race when I heard the crowd coming in and settling down before the lights dimmed. The butterflies in my stomach just before the music began. The anticipation, backstage and out front. The stage fright. A silly waste of time. I winked at myself in the mirror. (That’s all in the past, kiddo. Relax, you’ve got it made.)…I knew how to wrap that audience around my little finger and make them love me forever and ever. I knew it all. What I didn’t know was that the whole thing had gone to my head.”

Carol stepped out onto the stage to a huge round of applause and set off on her usual set piece that always knocked it out of the ballpark. The result? She bombed.

“…they were paying attention. They were listening. And they weren’t laughing….Not one real laugh. A polite titter or two, and that was it. (Ohmygod, I’ve lost it!)

Afterward, she assessed the situation and the cause.

“I had bombed. Royally. And in my gut I knew why. I had been too cocky, too sure of myself. I wasn’t human anymore. And it showed. It affected (infected) my whole attitude. I wasn’t funny. I was abrasive.”

But Carol, always the professional, if a bit humbled, prevailed.

“My heart was racing, and I had butterflies in my stomach before I went on for the midnight show. It went a lot better.”

An audience that sees a hint of “I’m putting it all on the line here, people,” takes notice − subliminally if not intentionally. One of the things I often get credit for from my audiences is that I joke about almost anything that goes wrong on stage, particularly if it’s my own blunder like flubbing a line or advancing a slide too soon. But even if it’s not my fault (a screen suddenly going dark, a car alarm going off), merely seeing that I’m just a guy doing his best and having a good spirit about it goes a long way − especially if the audience can see that overall, I made a strong effort to be prepared.

Last night, I watched the brilliant Adam Lambert coach a young American Idol contestant. She kept trying to vanquish her nerves and Adam quite effortlessly and offhandedly relayed this excellent advice to her:

“There’s a point where adrenaline and nerves , you can harness them and make them work for you. Something about that frenetic energy, it can create magic…you may get a little butterfly in your stomach; so use it!”

Not too shabby for the guy who came in second place. Maybe, like Carol, in falling a bit short of his mark, he learned not to take himself quite so seriously, to primarily go out there, make it fun for himself, and do good work. That’s the main thing we want from a speaker, too.

So let the butterflies be a part of your intention, instead of seeing them as a problem.

For those who hit upon this page directly:

Milo Shapiro of www.PublicDynamics.com has been coaching and running corporate classes in public speaking skills since 2004. He meets clients in person in San Diego, internationally via Skype, or as fly-in support. His books:

can be found on the “Books” page of his site.

Milo is also a 20+ year performer of improvisation, tying these skills into fun teambuilding events that bring out communication and collaboration in teammates. He is a featured speaker at conferences on the topic of public speaking skills as well as having fun, interactive motivational keynotes that get the entire audience playing improvisation. More on these programs at www.MiloShapiro.com .

If you enjoyed this article, visit the Blog page at www.MiloShapiro.com to see past articles and other shorter posts by Milo.