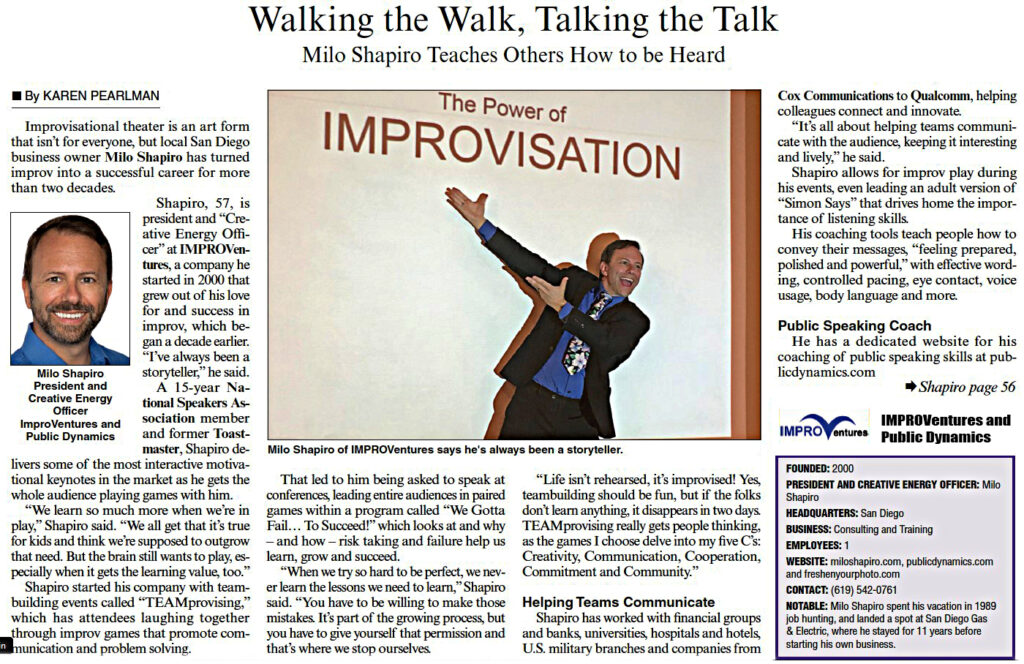 [As the continuation on page 56 (shown below) is much harder to read, a transcription of the text appears for you below the image]

“As much as I love speaking, I was thrilled to discover this knack for watching people and showing them how they can use their face, body, voice, and especially their words more effectively,” Shapiro said.  “Then, add in using humor and telling stories better.  It creates confidence as they know they’re improving.”

The New York native has also authored several books, including “Public Speaking: Get A’s, Not Zzzzzz’s!” and “The Worst Days Make The BEST Stories! (and Other Life Lessons)”  Born in Queens, NY, Shapiro earned a computer science degree from the University of Albany1, which came in handy during more than a decade of work in the I.T. world at San Diego Gas and Electric, starting in 1989.

While working in I.T., Shapiro studied improvisation on the side, learning about spontaneity and creativity and improv’s deeper value as a way to better connect with others.

Shapiro started studying improvisation in 1990, joined his first troupe in 1992, and began teaching improv in 1993.  Shapiro has traveled around the United States and Canada and served many years as the business manager of the San Diego Chapter of the improv chain, TheatreSports.

One of the things that draws him to improv is that you’re not expected to “do a perfect show,” he said.  “The audience forgives your mistakes because they know the risks you’re taking.”

After 11 years at SDG&E, in 2000, he made the career decision that defines him now − that he wanted to apply improvisation to business practice, personal development, and presentation skills.

“I think it’s OK to have more than two talents2,” Shapiro said.  “I’ve been in the business for 22 years and have yet to have a business plan.”

Shapiro has done podcasts and also has a blog where he shares stories and insights, offers life tips and business ideas, and has a free e-Zine that comes out a few times a year via MiloShapiro.com .

1 A correction: There is no “University of Albany”, though some do call it that for short.  It is the State University of New York at Albany, aka SUNY Albany, one of New York’s four state universities.

2 In the interview, which certainly had to be shortened, I explained that I tried for a long time to hide FreshenYourPhoto from coaching and speaking clients and colleagues.  My fear was that I wouldn’t appear serious enough about my primary career if they knew that I had this second business.  There came a day when I decided that it just wasn’t necessary to hide that part of myself anymore or worry about the implications.  Overall, I’ve received great feedback from people who were intrigued about my taking a hobby and making it a second source of income and artistic expression.  I went on to say that if I only thought linearly, I would still only be doing teambuilding and never have ventured into the speaking, coaching, or photo editing.  Improv taught me to just keep building on what I saw and let go of my original idea.  Without that extra chunk of the interview, the second sentence doesn’t make quite as much sense there.